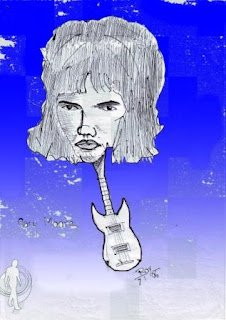 Gary Moore is acknowledged as one of the finest musicians that the British Isles has ever produced. In a career that dates back to the 1960s, there are few musical genres that he has not turned his adroit musical hand to, and has graced the line-ups ever several notable rock bands, Thin Lizzy, Colosseum II and Skid Row to name but three.

Gary Moore was born in Belfast, Northern Ireland, on April 4th 1952. Like many others, he was turned on to rock and roll first through hearing Elvis Presley, and then via The Beatles. Seeing the likes of Jimi Hendrix and John Mayall's Bluesbreakers in his hometown in the mid-60s opened up to him the rich world of The Blues. Hearing the art of the Blues guitar performed by such lauded exponents as Peter Green fired Moore's nascent talent, and it wasn't long before he was being hailed as a teen musical prodigy. Indeed, it was Green himself who helped foster Moore's career, a debt that was repaid handsomely when Gary cut his warm and heartfelt tribute to his mentor, the 'Blues For Greeny' album, released in 1995.

Gary's first band of note, the power trio Skid Row, secured a record deal with the CBS label in 1970. By this time, Gary had moved to Dublin, and befriended Phil Lynott, who filled the vocal role with Skid Row until shortly before the CBS deal was signed. Gary cut three albums with the band, and toured the USA supporting The Allman Brothers Band, and Mountain amongst others, before he split Skid Row to embark on a solo career. This proved short-lived, as Gary was soon to reunite with Phil Lynott as replacement for Eric Bell in the Thin Lizzy line-up. Although he was in the band for a relatively brief tenure, he would rejoin their ranks following the departure of Brian Robertson in 1977, and again, finally, for the 'Black Rose' tour in 1978.

In 1979, Gary's solo career began in earnest with the evocative hit single, 'Parisienne Walkways', which pitched Gary's tasteful, blues-soaked lead guitar with a moody Phil Lynott guest vocal. The single reached the UK Top Ten in April of that year, and the subsequent album, 'Back On The Streets' was similarly well-received.

The late 1970s and early 80s were characterised by Gary's restless search for the best musical settings for his talents; a reunion with Phil Lynott produced the powerful 'Out In The Fields' hit single (1985). He explored his Celtic roots on the album 'Wild Frontier' (1987), but it was with the 1990 album, 'Still Got The Blues', that Gary arrived at a rich musical vein within which his creativity could flow freely. This and its successor, 'After Hours' saw cameo appearances from the likes of such Blues guitar greats as Albert King, BB King, and Albert Collins, and it is a testament to Gary's own remarkable talents that he more than held his own amongst such august company. In 1994, Gary worked alongside Ginger Baker and Jack Bruce in the band BBM, cutting one accomplished album, before resuming his solo career.

The, 'Back To The Blues' album saw this consummately talented musician revisit The Blues with renewed vigour and determination, after the more experimental 'Dark Days In Paradise' and 'A Different Beat' albums. A ten-track collection that mixes excellent Moore originals with gritty and intense covers of standards such as 'Stormy Monday', 'You Upset Me Baby' and 'I Ain't Got You', the album is nothing less than a resounding return to form. Gary effortlessly mixes and matches contrasting styles within the idiom whilst displaying awesome feel for the music and dazzling technique. Recorded almost as a 'live in the studio' affair, 'Back To The Blues' swings and rocks, and shows Gary Moore to be a True Keeper of the Blues Flame.

But, in the tradition of keeping his fans and critics guessing, 2002 saw Gary Moore crashing back onto the music scene with what has to be his heaviest collection of songs to date, once again forcing people to reassess any opinions and preconceptions they may have of him.

This time round though, Moore has decided to share the limelight, joining forces with ex-Skunk Anansie bassist Cass Lewis and Primal Scream drummer Darrin Mooney to form "Scars", a true power trio in every respect. Gary was blown away by the power and precision of Mooney's playing when he was auditioning drummers two albums back, and whilst looking for a bassist to complete the new line-up Darrin suggested that he take a look at Cass.

When they all got together to play for the first time, it was perfect. Everything just clicked. It was so natural, so completely uncontrived that it was immediately obvious to Moore that this was going to be the ultimate line-up, and he was right. Just a few months down the line and the eponymous album has been completed. Heavy, melodic, twisted rock 'n' roll that is going to make many people sit up and take notice!

0 Response to "Tribute to Gary Moore"