Bully! : The Life and Times of Theodore Roosevelt: Illustrated with More Than 250 Vintage Political Cartoons 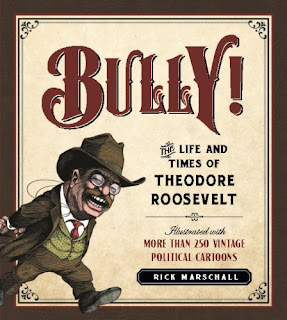 One of America’s most beloved presidents comes to life in this comprehensive, unique biography illustrated by more than 250 period cartoons.

Theodore Roosevelt, adored for everything from his much-caricatured teeth and glasses to his almost childlike exuberance and boundless energy, as well as his astounding achievements, captivated Americans of his day—and the cartoonists who immortalized him in their drawings. In Bully! The Life and Times of Theodore Roosevelt, author and cartoonist Rick Marschall tells Roosevelt’s story, using words and colorful images alike. Incorporating hundreds of vintage illustrations, Bully! captures Roosevelt’s remarkable life and incredible accomplishments as no other biography has.

In Bully! you will read and see why this man continues to capture the imaginations of Americans and those who love America. You will learn:

0 Response to "Bully! : The Life and Times of Theodore Roosevelt: Illustrated with More Than 250 Vintage Political Cartoons"