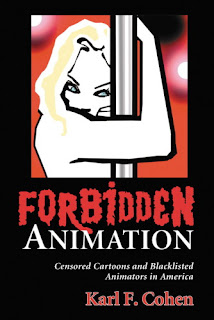 A history of censorship in the animation industry. Tweety Bird was colored yellow because censors felt the original pink made the bird look nude. Betty Boop's dress was lengthened so that her garter didn't show. And in recent years, a segment of Mighty Mouse was dropped after protest groups claimed the mouse was actually sniffing cocaine, not flower petals. These changes and many others like them have been demanded by official censors or organized groups before the cartoons could be shown in theaters or on television. How the slightly risqué gags in some silent cartoons were replaced by rigid standards in the sound film era is the first misadventure covered in this history of censorship in the animation industry. The perpetuation of racial stereotypes in many early cartoons is examined, as are the studios' efforts to stop producing such animation. This is followed by a look at many of the uncensored cartoons, such as Lenny Bruce's Thank You Mask Man and Ralph Bakshi's Fritz the Cat. The censorship of television cartoons is next covered, from the changes made in theatrical releases shown on television to the different standards that apply to small screen animation. The final chapter discusses the many animators who were blacklisted from the industry in the 1950s for alleged sympathies to the Communist Party.
Share on Facebook
Share on Twitter
Share on Google+
Share on LinkedIn