Fringe: A Cartoon History of the George Dubya Bush Years 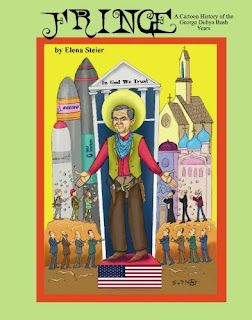 These political cartoons by Elena Steier lampoon the eight years of the administration of President George Dubya Bush. Subjects include transvestite neocons, inquisitor supreme court justices, an administration operating out of the Okeefenokee Swamp, and an army of military contractors. The collection begins with a chronicle of the strange election of 2000, seques to the Enron crisis, continues through the events of 9/11, the Wars in Afghanistan and Iraq, the 2004 election, the devastation of Hurricane Katrina, the 2006 mid-term elections, and finally, the present financial crisis so well presaged by the cartoons of the first part of the collection. If nothing else, the heavy Enron influenced make-up of the first Bush administration promised a fine team of experts capable of creating any kind of financial disaster. The cartoons in this collection provide a singularly unique vision of eight years of national politics under George Dubya Bush.
Share on Facebook
Share on Twitter
Share on Google+
Share on LinkedIn

0 Response to "Fringe: A Cartoon History of the George Dubya Bush Years"