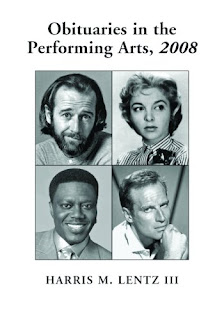 The entertainment world lost several legendary stars and a host of other men and women involved in the performing arts in 2008. Notables who died include Heath Ledger, Barry Morse, Suzanne Pleshette, Bo Diddley, Tim Russert, Eartha Kitt, Beverly Garland and Isaac Hayes. Obituaries of these and other performers and filmmakers, musicians and producers, dancers and composers, writers and others associated with the performing arts who died in 2008 can be found in this comprehensive reference work. For each, the date, place, and cause of death are provided, along with a recap of their career and citations from major newspaper and periodical stories reporting the death. Filmographies are given for film and television performers, and photographs of many of the individuals are included. Individual books in this annual series are available dating back to 1994. A subscription plan is available for future issues.
Share on Facebook
Share on Twitter
Share on Google+
Share on LinkedIn