Alan Moore, Out from the Underground: Cartooning, Performance, and Dissent 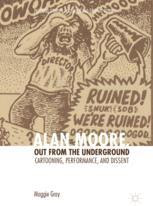 This book explores Alan Moore’s career as a cartoonist, as shaped by his transdisciplinary practice as a poet, illustrator, musician and playwright as well as his involvement in the Northampton Arts Lab and the hippie counterculture in which it took place. It traces Moore’s trajectory out from the underground comix scene of the 1970s and into a commercial music press rocked by the arrival of punk. In doing so it uncovers how performance has shaped Moore’s approach to comics and their political potential. Drawing on the work of Bertolt Brecht, who similarly fused political dissent with experimental popular art, this book considers what looking strangely at Alan Moore as cartoonist tells us about comics, their visual and material form, and the performance and politics of their reading and making.
Share on Facebook
Share on Twitter
Share on Google+
Share on LinkedIn

0 Response to "Alan Moore, Out from the Underground: Cartooning, Performance, and Dissent"