The Implacable Urge to Defame: Cartoon Jews in the American Press, 1877–1935 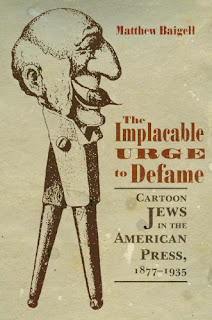 From the 1870s to the 1930s, American cartoonists devoted much of their ink to outlandish caricatures of immigrants and minority groups, making explicit the derogatory stereotypes that circulated at the time. Members of ethnic groups were depicted as fools, connivers, thieves, and individuals hardly fit for American citizenship, but Jews were especially singled out with visual and verbal abuse. In The Implacable Urge to Defame, Baigell examines more than sixty published cartoons from humor magazines such as Judge, Puck, and Life and considers the climate of opinion that allowed such cartoons to be published. In doing so, he traces their impact on the emergence of anti-Semitism in the American Scene movement in the 1920s and 1930s.