Rogue Cartoonist: The Internet Perils of a Citizen-Muckraker 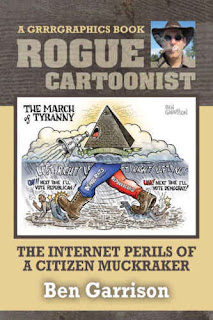 Overview: "Rogue Cartoonist" tells the story of an independent artist and muckraker named Ben Garrison. In 2008, the big banks were bailed out. Ben wrote his senators and congressman and asked them to vote against the bailout, but the bill passed anyway. Ben decided voting was not effective. He wanted to do more. He wanted to do what the mainstream media wasn't doing. He wanted to ring alarm bells. He became a citizen muckraker. In 2009, he decided to draw editorial cartoons to help create awareness of a growing police state, corrupt politicians, and a dysfunctional system of money. He began uploading the cartoons to message boards on the Internet. They spread like wildfire. Many went 'viral.' Ben's cartoons were republished on many respectable blogs. He received a lot of encouraging email. Then a legion of Internet trolls began attacking him. He received hate mail. His cartoons were altered by anonymous entities. The trolls defaced his work into anti-Semitic and racist hatred while making sure they left his name on the cartoons. They spread the libel daily and for five long years. Internet search engines began picking up the hate. Ben's reputation was ruined by an invisible horde of haters. At first he decided to ignore the trolls, but they didn't grow bored. Instead they ramped up their attacks on social media. Cyber bullying and trolling have become a big problem on the Internet. Ben explains that dark side and in his book he unmasks a few of the trolls. He explains why it's difficult to bring them to justice. He describes the popularity of Internet memes among young people. His book encourages others to become citizen muckrakers. It also serves as a warning—those who are effective can also face massive attacks from anonymous trolls who are out to shut down the free speech of those speaking out against government
Share on Facebook
Share on Twitter
Share on Google+
Share on LinkedIn

0 Response to "Rogue Cartoonist: The Internet Perils of a Citizen-Muckraker"