Home » Info Buku » The Comic Art of War: A Critical Study of Military Cartoons, 1805-2014, with a Guide to Artists
Info Buku

The Comic Art of War: A Critical Study of Military Cartoons, 1805-2014, with a Guide to Artists 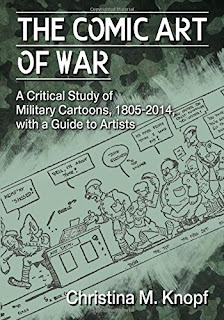 For military cartoonists the absurdity of war inspires a laugh-or-cry response and provides an endless source of un-funny amusement. Cartoons by hundreds of artists-at-arms from more than a dozen countries and spanning two centuries are included in this study--the first to consider such a broad range of military comics. War and military life are examined through the inside jokes of the men and women who served. The author analyzes themes of culture, hierarchy, enemies and allies, geography, sexuality, combat, and civilian relations and describes how comics function within a community. A number of artists included were known for their work with Disney, Marvel Comics, the New Yorker and Madison Avenue but many lesser known artists are recognized.
Share on Facebook
Share on Twitter
Share on Google+
Share on LinkedIn