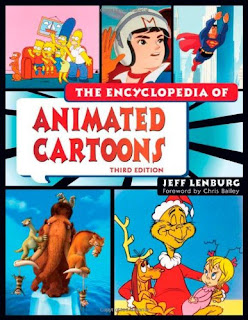 This ready reference details every cartoon and every cartoon character ever created. This guide documents every production from 1911 to the present with more than 2200 cartoon entries.
From the silent shorts of the 1920s and '30s to the classic Disney features of the '40s, and from the Saturday morning television shows of the '70s and '80s to the computer-generated blockbusters of today, animation remains widely popular with viewers of all ages. With the current surge of interest in anime, the continued success of the Cartoon Network™, and the steady flow of animated movies, animation plays an important role in today's pop culture.
The Encyclopedia of Animated Cartoons, Third Edition remains the definitive source on this entertaining subject. This edition of the "ultimate cartoon fan bible" adds copious amounts of new material, bringing the book up to date and broadening the scope of its coverage. Arranged in an A-to-Z format and separated into five major sections--Silent Cartoon Series, Theatrical Sound Cartoon Series, Full-Length Animated Features, Television Cartoon Series, and Animated Television Specials--this comprehensive encyclopedia includes an extensive historical overview of animation, complete information about Academy and Emmy award winners, and a chronology of animation milestones. Coverage of increasingly popular anime has been added and expanded.
Entries include:

0 Response to "The Encyclopedia of Animated Cartoons, Third Edition"